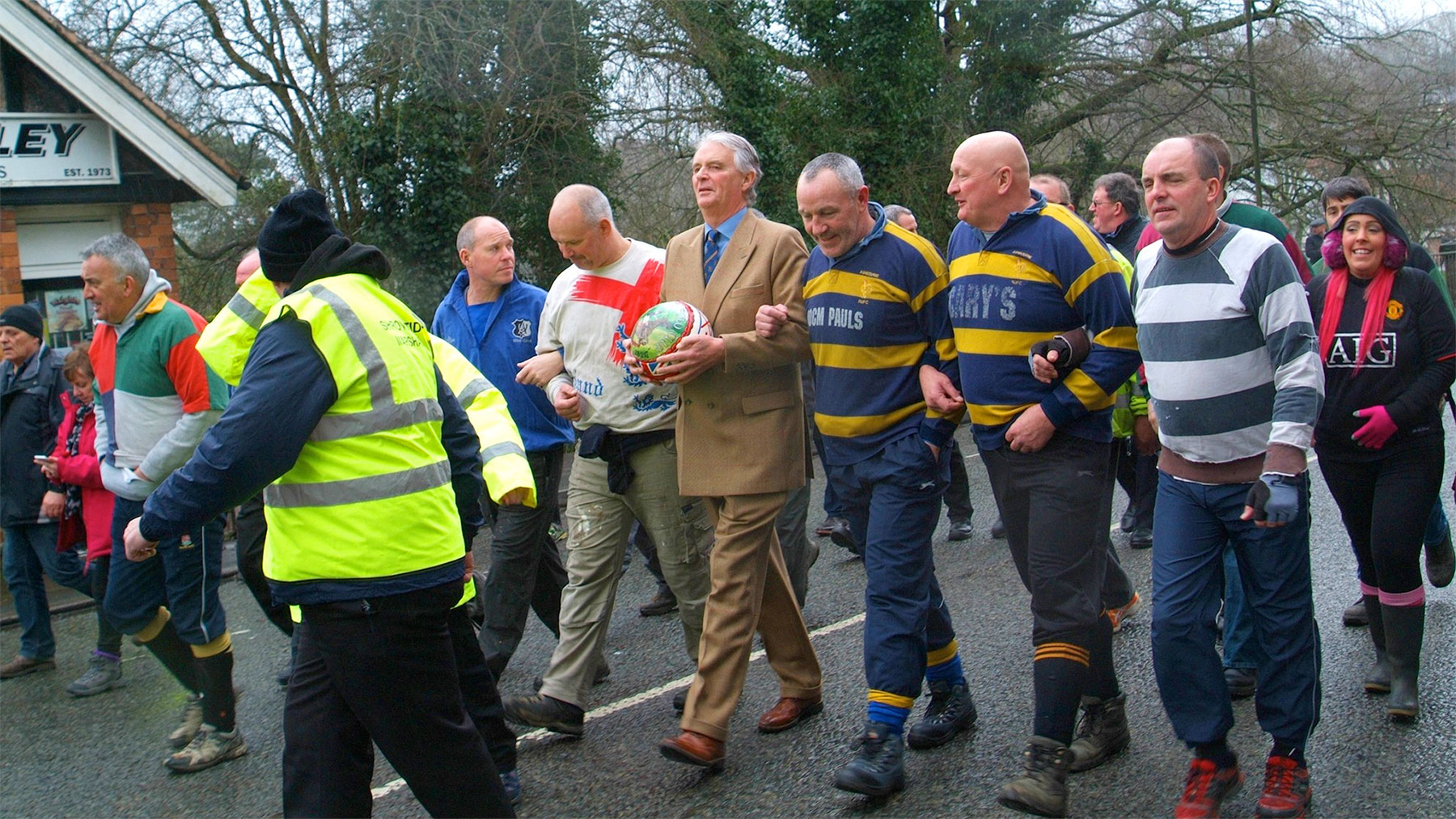 At the concept stage the plan to create the Shrovetide sculpture involved diligent research and a commitment to recording the smallest detail of the actual game.

Although Nigel had not witnessed the cut and thrust of the historic game for many years, the 51-year-old decided to place himself in the middle of the action of the 2017 game, which began from Ashbourne’s Shaw Croft car park, with the turning up of the ball at 2pm on the Shrove Tuesday by Dr Burston.

Armed with a camera erected upon a 25 feet tall pole, more usually used for inspecting stonework and gutters, Nigel fought his way into the “hug” with his raised camera to try and capture close up images of the ball in action.

Despite being knocked over, suffering kicked shins, dislocating a little finger and chipping the bone in his thumb he managed to get some “fantastic images” among the hundreds of photographs taken.

Nigel said: “I had been tasked with finding a split second to represent the event and that it must  capture all the power and the emotion of the event."

"I could see a multitude of emotions in everyone’s face. Unbridled emotion. Those playing in the teams are absolutely focused on getting their plan executed, they manoeuvre themselves, make tactical false runs and you can see the emotion in their faces as they communicate with each other. Visitors are drawn in by the enthusiasm of the actual players and then there are people on the periphery frightened that the ball will come their way.”

I was registering these emotions. There was elation, screaming and laughing, genuine fright and also aggression. I realised the focus wasn’t the ball, the game, or Ashbourne. The significant thing that occurred was the simultaneous waves of different emotions coming from this body of people.  I thought to myself where else on earth could you see that? This was what was unique about the event.”

Determined that he must somehow make this panoply of emotions the artistic focus of the eventual piece of art Nigel focused his attention on the throng of people in the centre of the “hug” – the visitor players as well as the officially nominated team members. And when, on the first day of shooting film, he captured an image of a comparatively small group, in the epi-centre of the game, each face expressing a different emotion, he knew he had found the inspiration for the “spiritual” centre for his piece.

A second epiphanic moment occurred on the afternoon of the second day of play, when the ball was manoeuvred into the duck pond, - a tactic used to separate enthused spectators from the serious players.

“You could see expectations rose for the group in the water for they had a clear chance of getting the ball, the dedication on their faces was tremendous. Then suddenly you saw this intensification of emotion. Their hands went up and the emotion wasn’t in their faces but in their hands. They were pulling at one anothers’ clothing, at wrists and pulling each other’s fingers off the slippery ball.

“The buoyancy of the water pushed bodies away from each other, all that remained was a battle of the wrists. You could see hands and fists fighting through the splashing and the spray and I knew that was the moment.”

As Nigel watched the ball pop up into the air out of the grasp of the players, he saw in his mind’s eye the pattern for his sculpture: a disappointed hand which would now never capture the ball, an elated hand whose fingers were grasping the ball and an angry hand of a player who is grabbing the sleeve of another player.

He said: “The posture of the hands revealed the emotion of each of the players. That had to be the substance of the piece of work we were going to create. We would make the intangible, tangible."

Being present in the moment had provided inspiration but would also provide authenticity for this important piece of work.

“I could never have come up with the idea without being part of the event. I would not have been able to create an honest piece of work.”

Back to the Drawing Board

A series of dots and dashes were jotted down onto a page by Nigel, who was keen to capture the shape and spirit of his idea for the Shrovetide sculpture.

“No one but my own artists would recognise it as a drawing, “said Nigel. “And a proper drawing would have interfered with my thought process.”