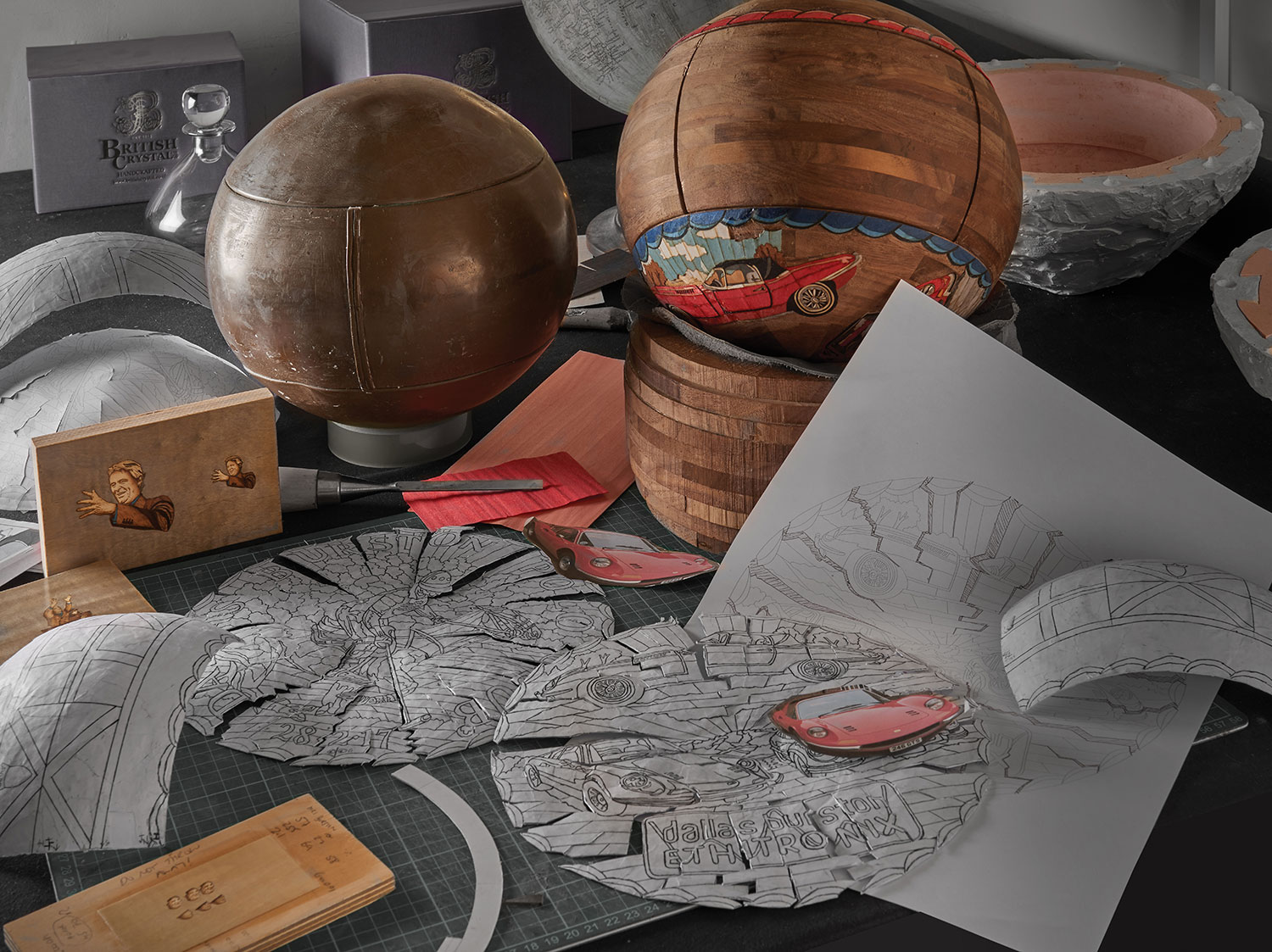 Six weeks in the making, the carved football was created ingeniously to elicit a sense of wonder in the viewer and to playfully reflect Dr B’s own capacity for originality and inventive thinking.

The perfect hollow sphere appears deceptively simple in design but the Wheathills team had to invent a means of making a marquetry ball – the single most technically challenging aspect of the whole project.

“We not only wanted to capture perfectly the beautiful shape of the actual ball, but its handstitched details, its bumps and dents.”

To do so, the team of craftsmen cast the original ball in a bronze resin and then used the resin cast as a pattern over which vibrantly-coloured marquetry images could be drawn, designed, spaced and created, all true to the painted design on the original goaled ball

Next a hollow walnut ball, identical to the bronze resin cast, was created from 120 segments of walnut, each walnut layer cut in decreasing size to create the perfect curve of the ball. This was then lathe-turned and finally carved with the dents and bumps of the original.

The marquetry, designed on the resin cast, was transferred to the walnut ball and the whole was cut in three places. A horizontal cut was made then a vertical cut of one half of the horizontal.

The three parts were then micro engineered with hand-made knuckle hinges, levers and pistons, so that at the push of a secret button concealed within the marquetry, the Shrovetide football would open up, revealing a hand-blown English crystal decanter set upon an up lit carved walnut cushion.

Layers of intricate detail unfold to the viewer. The interior lid of the sphere is inlaid with a delicately carved “yew tree of life”, in yew wood, to symbolise tradition, strength and success.

Holding the ball aloft are four carved hands. These appear to struggle to emerge from the surface of turbulent carved water, which forms the top of the memory box. The fight-of-the-hands provides a bold and arresting visual focus, and seems to capture the spirit of the game, which at its heart, at least for artist Nigel, is a maelstrom of conflicting emotion felt simultaneously.

The entire hand sculpture conveys a sense of movement and the energy and vigour of the game. And each individual hand records tension through detailed carving of taut sinew and muscle. We can identify the elation and sense of anticipation of the player whose finger tips are just about to gain the ball, we can locate the anger of the player, who knows he’s out of the running and can only reach in frustration at the shirt sleeve of a competitor.

And as carved water droplets splash from the hands to the body of water carved upon the lid of the memory box, the viewer comprehends in a flash, the intense physicality of the game and the environment in which it is played.

To create such vivid realism in wood required many steps. Craftsmen at Wheathills used their own hands as models, shaping them into the positions captured by Nigel’s film footage of a hug on Ash Wednesday 2017.

In turn drawings and new photographs were made and then plasticine moquette’s of the hands were built over wire skeletons. These were carefully molded into positions recorded on the photographs before plaster casts of them were taken.

Nigel explained: “The importance of having the plaster cast hands was that the carver could then move them around to any angle, as he copied them in carved walnut.”

In a fitting irony, it was the carver’s strong hands which were faithfully represented in finished walnut pieces – a masterly self-portrait of muscle, cuts and a broken fingernail.

The extraordinary memory box, which lies beneath the sculpture of the struggling hands holding the Shrovetide ball, also tells an important aspect of the Royal Shrovetide Football match of 2017.

It is decorated with four brightly-coloured panels of marquetry capturing composite scenes from the game and features 75 tiny detailed portraits of the characters present at the event. Each portrait was based upon some of the hundreds of photographs taken by Nigel during the event.

To create unparalleled levels of accuracy, Wheathills artists first drew the portraits from the original camera footage. Those who attended the match were then invited to a presentation at the British Legion in Ashbourne and tasked with identifying themselves from the blown-up hand-drawn images.

Nigel said: “We got them to write their name against their portrait and then pose for a photo. The fun was we asked them to pull the face they were captured pulling on the actual day!

“Using the new portrait quality photographs, we could plot their faces in a new drawing to make a completely accurate portrait of them in marquetry.

This was without doubt the most difficult part of the memory box to create. Incredible care and detail were expended on the portraits but we wanted to do this to document history."

"In order for the entire sculpture to sing every element has to be right!"

The memory box is also carved with a walnut tree whose branches act as an artistic barrier to contain the carved body of water which lies on the top of the box. And at the release of a concealed button, a side of the memory box can be opened to reveal a display of six crystal glasses, to be used for a whisky toast. A further drawer, to keep safe mementos of the match, can be released with the press of a second secret button. 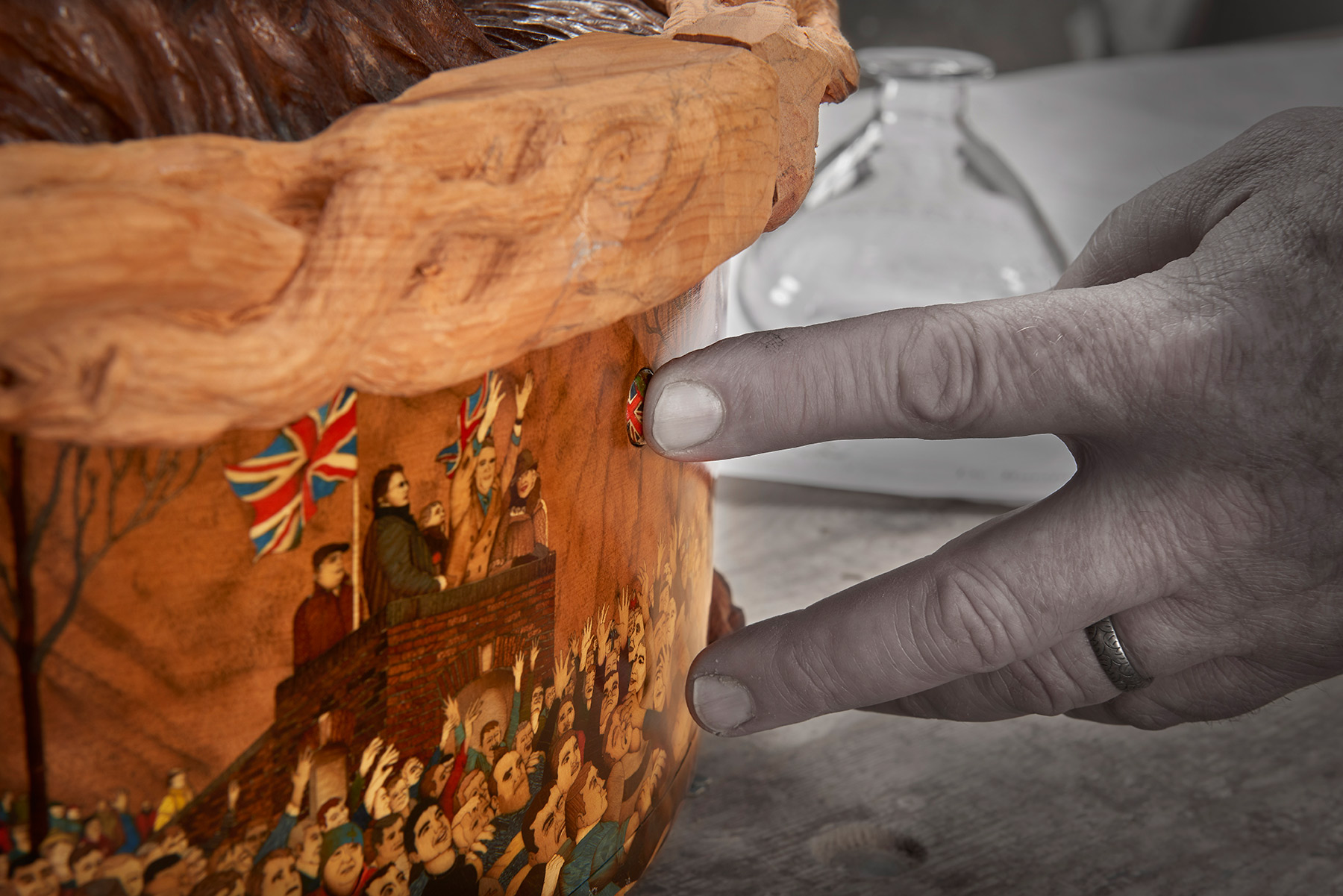 A butt walnut and yew wood table supports the memory box sculpture and this stand is designed upon a clever conceit, which renders it a conversational piece. The table’s four delicate serpentine legs have been engineered remarkably to stand on the short grain of the wood – an achievement, when furniture legs usually rely for their inherent strength on the long grain cut of the timber in order to stand and bear weight.

Said Nigel: “We wanted to create that sense of wonder, to raise the question in the viewer of how the hell does this work? I was really trying to put the impossible into a piece and to encourage curiosity and interaction with it.”

There are delightful carved details which help locate the event geographically for each of the apparently fragile hand carved and hollowed-out legs are decorated with climbing wintry ivy leaves.

The top of the stand is a lazy Susan, which when turned allows the viewer to see all the detailed elements of the ball and the memory box.

Memory box and stand are seamlessly visually connected in design as the each of the four carved walnut trees of the box line up with a leg of the stand. Moreover, the carved ivy which creeps up the stand legs also entwines the roots of the walnut trees on the box.