A place for secrets and surprises.

The Pantheon Theatre Box is an elaborate and playful celebration of the art of theatre and also represents memories about the life and travels of its owners.

An imaginary building, it nonetheless encompasses elements of real buildings that have been visited and it is populated by favourite playwrights, poets and artists as well as famous fictional characters.

Standing on its own purpose-built table, which boasts a revolving top, this box incorporates ten thousand pieces of timber and took 2,500 hours to complete.

It’s lantern top is illuminated via a large crystal inlaid with abalone shell which has light-reflecting properties.

Beneath is a dome of spalted beech and a walnut balustrade terminating in boxwood gilt urns on pedestals. The triangular pediment is inlaid with marquetry, depicting the Royal Coat of Arms entwined with English and Scottish emblematic design elements.

The entablature of quilted birch forms part of an entrance gallery with gilt Corinthian columns of zebrano. These are flanked by two pairs of walnut staircases. A set of semi-circular sycamore steps positioned to the front and rear, are inlaid with the points of the compass.

At the rear of the building Noel Coward can be seen peering through a left hand window , Tim Rice looks through a window on the right. Additional characters are represented in marquetry. Dame Judi Dench signs a programme at a stage door whilst at an opposite doorway stands Cameron Mackintosh.

Stone blocks on the building are created from quilted sycamore and the mortar between is of walnut. The walnut front door has a broken pediment above it, flanked by a pair of arched entrances, each with a staircase leading to the balcony within.

The stage is ''lit'' by gilt limelight shells.

Lowry can be seen painting a backdrop, whilst Lionel Bart with set designer Sean Kenny are writing a new play.

There is an imagiinative kaleidoscope of people and places. From the stage, the left hand arch leads to the streets of Manchester. The Artful Dodger sits on water trough outside a Tuscan market hall with a tiled floor. Sam Weller leans against a fountain with Mr. Pickwick discussing the latest papers. The Tuscan hills and road disappears into the distance. Adjacent is Billy Elliott dancing through an archway, whilst Oliver runs through an alleyway.

A bust of Shakespeare sits in a niche below the balcony of Romeo and Juliet and Fagin lurks in a gateway close by. In centre stage stands The Dickens Inn with the London to Rochester coach disappearing through the Coach House archway. A stage is flanked by balconies, where to the left is seated Michael Crawford and Andrew Lloyd Webber and to the right is the Romantic poet Byron and the two memory box creators Ernest and David. All is enhanced with a remote lighting system, which provides the ambient lighting to represent any time of day. 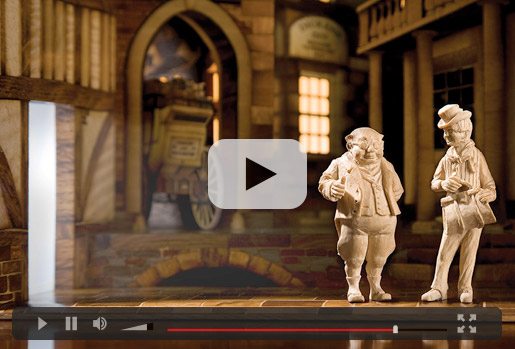