An iconic train from the 1930s has been restored to its former glory after a ten-year and £6million revamp, with wider seats and aisles to accommodate today's larger passengers.

Enthusiasts have faithfully returned the Brighton Belle to its original design that epitomised luxury and style during its heyday in the 1950s.

But they have had to make some unavoidable changes to make the historic transport compatible with the modern age of train travel.

The iconic Brighton Belle has been resotred to its former glory with the interior of one of the carriages reflecting the Art Deco style of the original 1930s train;

Disabled toilets have been installed in the original Pullman carriages along with toughened safety windows.

Heaters and USB ports have been hidden under the mahogany wooden tables and LED lighting placed in the Art Deco fittings. 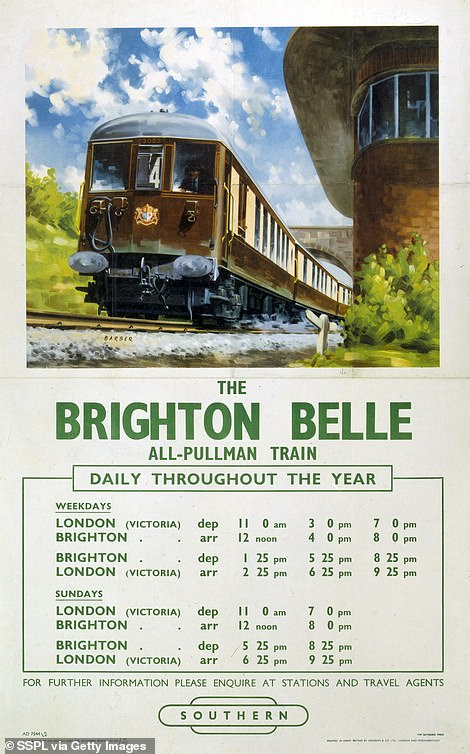 But the most noticeable change has been the loss of one of the four upholstered seats positioned either side of the aisle.

This has created space in the carriage to compensate for the increase in weight the average passenger has gained since the Belle's heyday of the 1950s.

The seats have been widened from 19ins to 22ins while the aisle has been expanded by over 7ins to 33.5ins to allow two people to squeeze past each other.

The outside of the carriages is still undergoing final renovation works.

The four all-electric carriages that have a capacity for 100 people are now fully operational and are due to go back into service for the first time since the Belle was withdrawn in 1972.

The 90mph trains will make pleasure journeys from London Victoria to the Sussex and Kent seaside, serving fine food along the way.

Gordon Rushton, a trustee of the 5BEL Trust, said: 'The Brighton Belle was the most famous electric train in the world, running each day between London and Brighton between 1933 and 1972.

'The quality of the accommodation puts today's First Class carriages in the shade, with each car individually designed by a different leading British design house.

'It was, and will be again, the leading icon of the Art Deco period.

'We own six carriages and are restoring the first four and will put them into service for 2020.

'We can more than break even with four carriages and we will look to add the other two later. 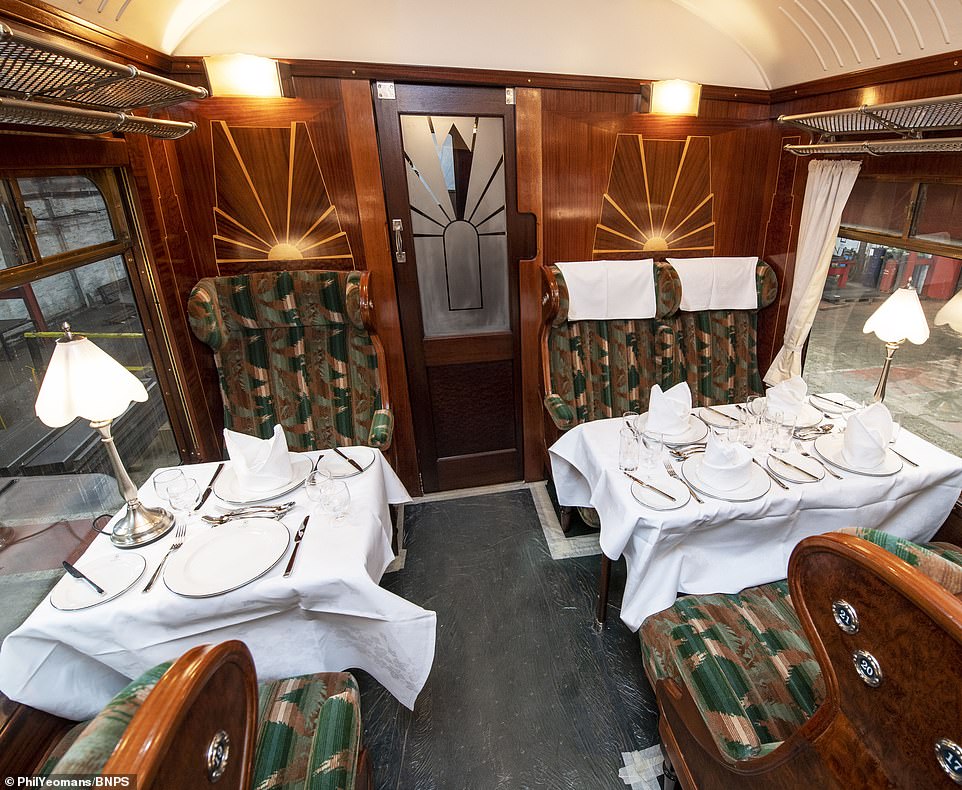 Fine dining was one of the defining features of the Brighton Belle, with oysters and champagne served on its final voyage 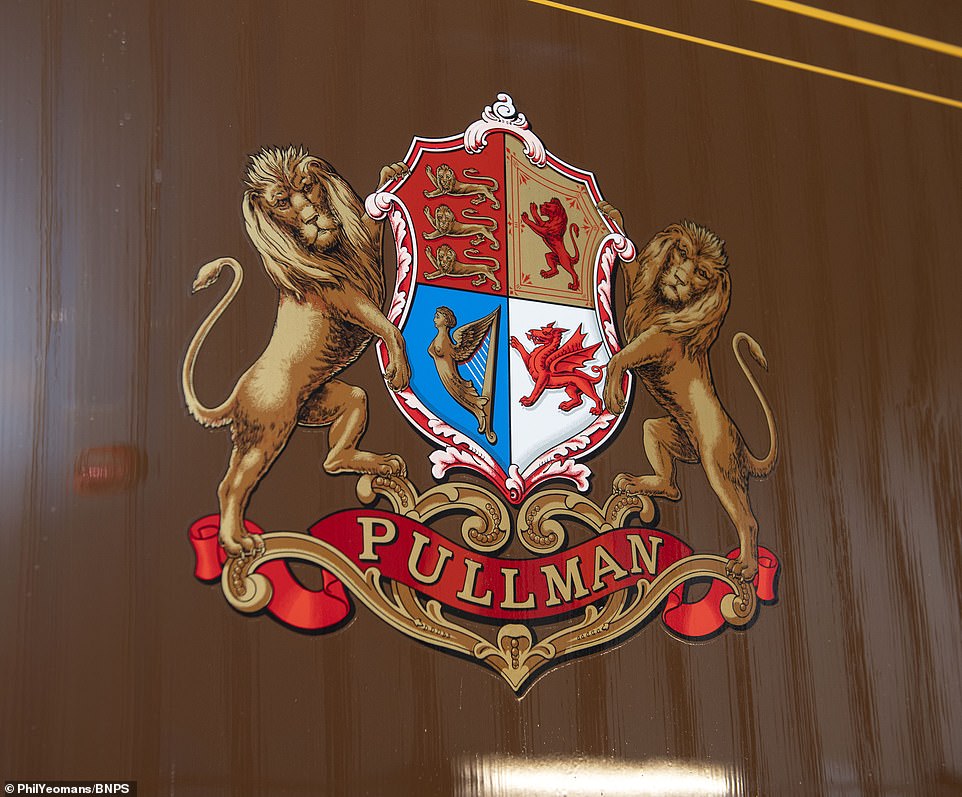 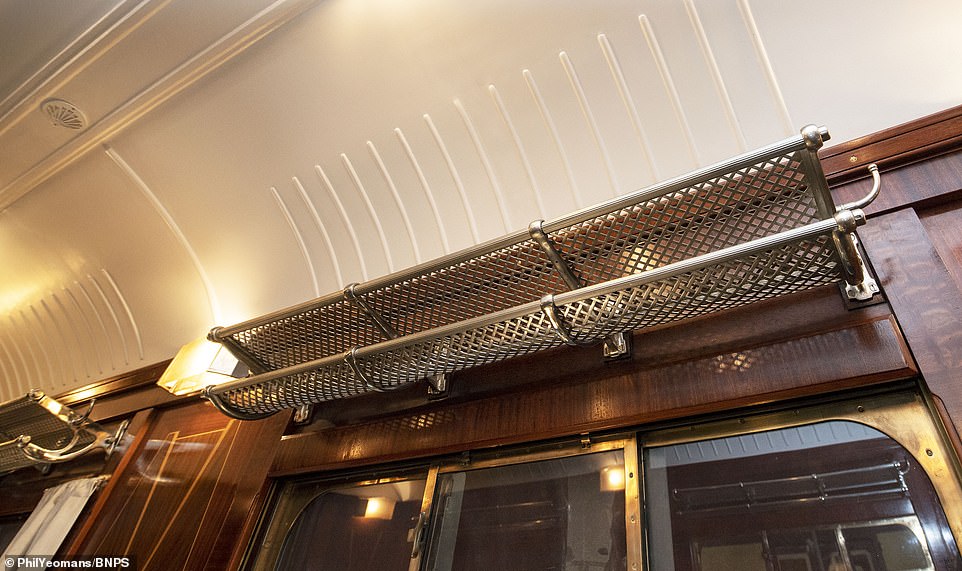 'We will take paying passengers on an A to A route, for example from Victoria to Ramsgate and back with a slap-up three-course meal which will either be silver or plate service.

'If we had four seats across the carriage there wouldn't be enough room for people to eat comfortably.

'Also the standard British posterior has expanded somewhat over the last 40 years so that has been a factor in the seating change as well.'

The Brighton Belle entered service in 1933 as the flagship of Southern Railway's electrification project.

It was the height of comfort with its plush chocolate and cream livery and allowed its passengers to travel and dine in style.

It carried the great and the good over four decades, including the Queen. 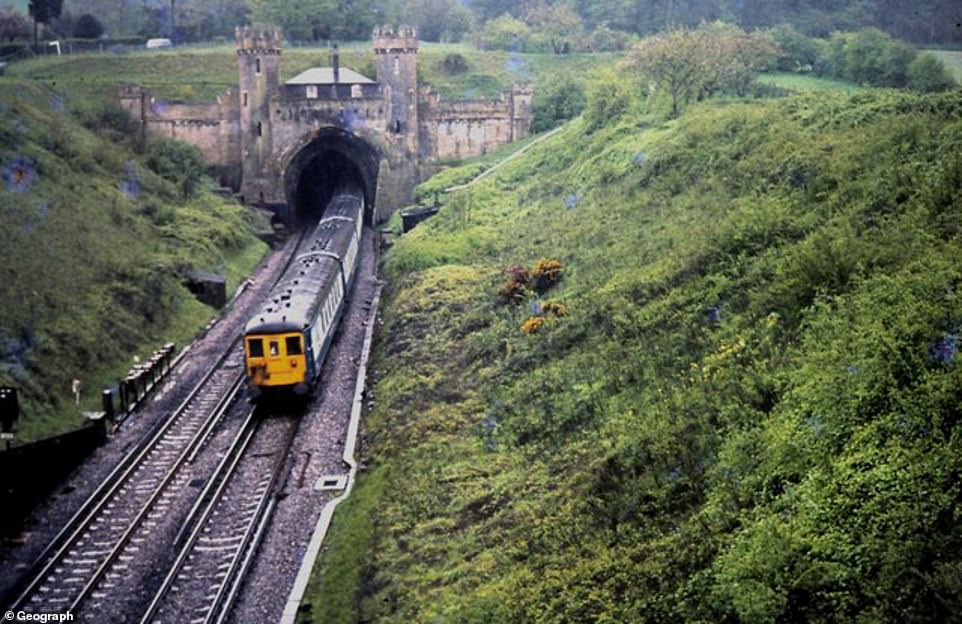 The Brighton Belle leaves the Clayton Tunnel during its final days in 1972. It was the most famous electric train of its time

Sir Laurence Olivier was also a regular passenger on the service that made the 51 mile journey from London Victoria to Brighton in 60 minutes.

Indeed, in 1970 the legendary actor led a protest when he found out one morning the train had stopped serving its signature dish of kippers.

They subsequently returned to the menu.

On its final run in 1972, well-heeled passengers dined on oysters and sipped champagne to see the Belle out in style.

Efforts were initially made to preserve its 14 carriages, with a handful being purchased by restaurants to make their venues stand out.

But they were costly to maintain and over time some of them were discarded and left to go to rack and ruin. 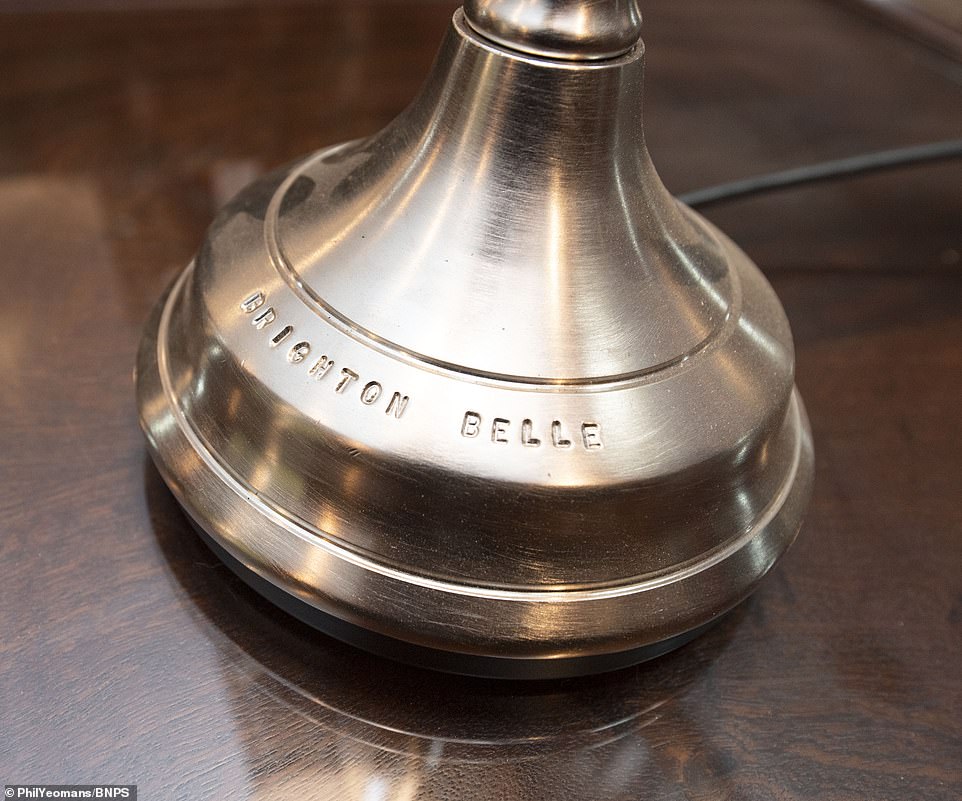 New table lamps have been commissioned for the restoration project. Gordon Rushton, trustee of the 5BEL Trust, said : 'Our aim is to have this wonderful train running on the mainline for many years so that future generations can enjoy an authentic 1930s travel experience'

Two were even found rusting away in a derelict railway shed near Brighton station covered in graffiti and pigeon droppings, with broken glass strewn across the floor.

The volunteers from the trust spent the next 10 years restoring them and recreated their 1930s Art Deco interior with new tables, fittings and glass crockery.

Mr Rushton said: 'Our aim is to have this wonderful train running on the mainline for many years so that future generations can enjoy an authentic 1930s travel experience.

'We are breaking new ground as no one has attempted to restore an electric train to the mainline before now.

'It has taken a long time and at great expense but that is because we want it to achieve the same quality as in its heyday.

'We are being cautious but hopefully the train will be ready for commercial operations in 2020.'

The restoration has taken place by coachbuilders WH Davis of Shirebrook, Derbyshire. It has been funded by several wealthy benefactors who are also heritage train fanatics.

In bringing the Pullman carriages up to 21st century standards for the mainline they have been fitted with new traction motors, control and braking gear and auto-stopping systems have been put in place.