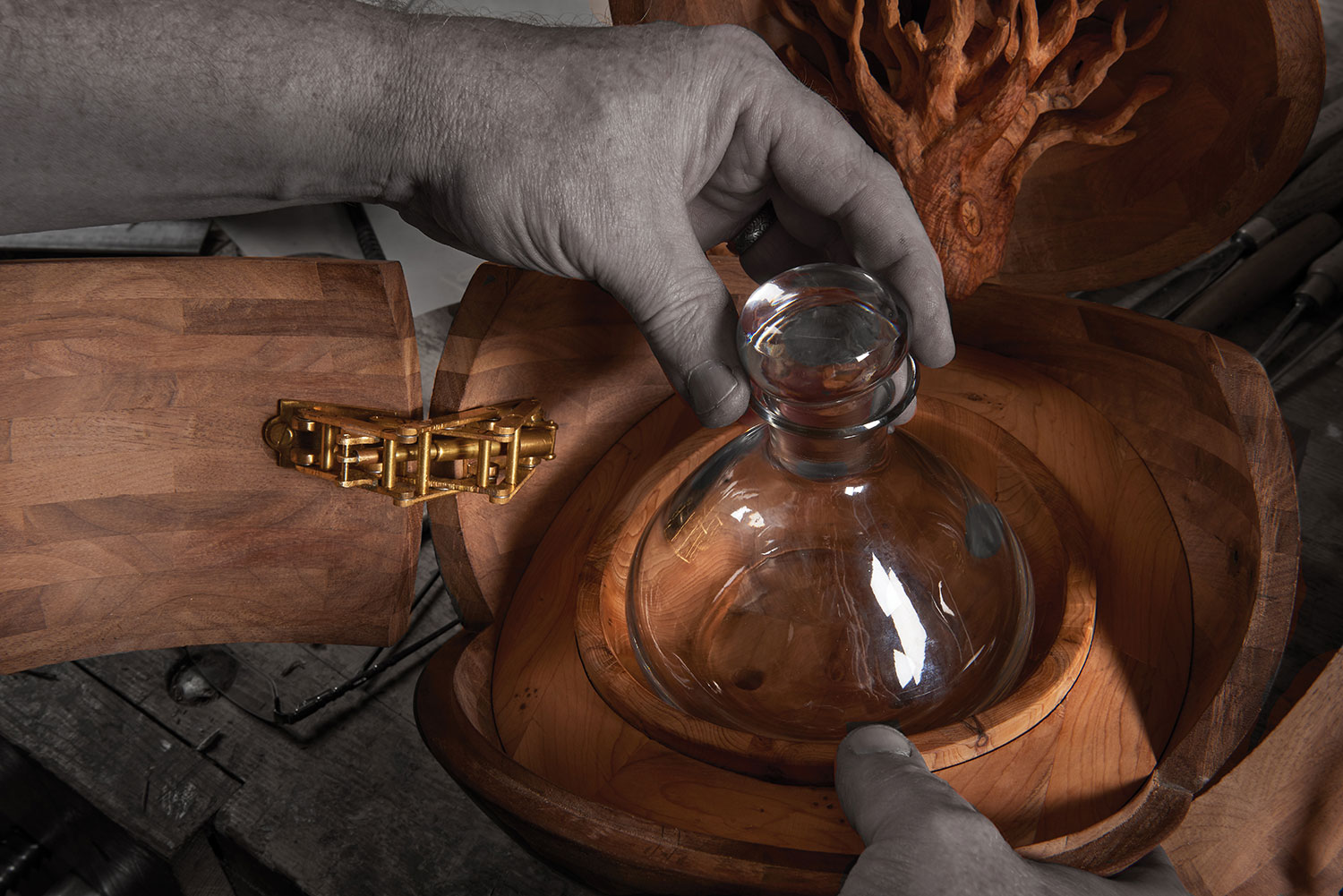 A modular creation with a spiritual dimension

A modular creation with a spiritual dimension

Although Nigel now knew a focal point for his sculpture would aim to capture an array of emotions expressed through the physical posturing of hands, there were other parts of the story to tell, which would make the sculpture complex and modular.

The piece in its entirety was to be a dramatic sculpture surmounting an intricately designed and decorated memory box set upon a magnificent awe- inspiring stand. And the whole would encapsulate in art form a momentous moment from the 2017 match – a powerful and striking three-dimensional representation of local history.

Nigel began to write down a series of accompanying concept notes for a memory-box sculpture piece that would take shape in the Wheathills workshops, over the next months.

He said: “I was steering the thing, but all the hard work is created by the craftsmen and women who absolutely poured their hearts into this project.”

One aspect Nigel insisted upon was that the work must capture in its intricate carvings the sense of where the game was played – not just the geographical location but to place the piece at a specific time of year, the fact that the game was played on a cold day in winter surrounded by the local natural outdoor environment.

“I wanted the piece to reflect the particular time of year.”

A key aspect was that the piece must also record the presence and reflect the personality of Dr Burston, the inventor of a non-invasive blood-glucose monitoring system, who had turned up the ball.

Over several years Wheathills and Dr Burston, known to friends as Dr B,  had become well acquainted as the Shrovetide sculpture represented the fourth commission for the firm from the highly successful 68-year-old businessman.

Nigel said: “Dr Burston is an exceptionally clever individual and inventor with a tremendous imagination and he’s also a playful person who enjoys fun. And I wanted to bring into play the characteristics of the man in the sculpture.

I thought our memory box sculpture should tantalise him with a hidden tantalus! I knew that he enjoyed the odd glass of whisky and sometimes the obvious is the right thing to do.

I didn’t want to create a work of art that would just stand in a corner I want it to be used. In this way the sculpture would be something he would interact with on good days with friends and using it would be a means of re-visiting his experience of turning up the ball which is a huge honour for any Ashburnian.

I knew an interaction with the sculpture would in fact emotionally transport him back to the wonderful day of the match. Our sculpture must represent more than its physical self, otherwise it is just an object. It must have a spiritual dimension.”

To characterise the piece with a sense of playfulness the tantalus would be carefully hidden inside an exquisite and finely detailed replica of the very ball “turned up” by Dr Burston on the afternoon of Shrove Tuesday in 2017 and that “goaled” by Kurt Smith at 8.20pm that evening. And the fully-sized ball, larger than a traditional football, would be held aloft by the beautifully expressive walnut- carved hands of the players.